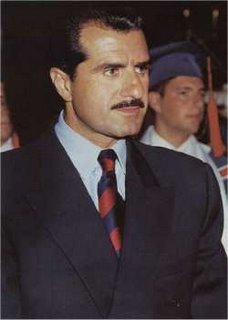 I do not know whether to curse on this entry. It is 4:40 AM. Hani G. sent a message that woke me up. The SMS message read as follows: "Tueni is dead."

A couple of months ago, Hummbumm conveyed to all of us that Gebran was in France because the Syrians made him aware that he was on the top of their list. Hummbumm knew because he is related to Tueni. My condolences, hummbumm. My condolences.

I wonder how Gebran's father feels. I wonder how Marwan Hamade feels. I am numb. I have become numb. It is hard to keep in touch with my emotions after so much killing.

Now Hassan Nasrallah is not the only prominent Lebanese political figure who has sacrificed his son to the "cause" of Lebanon. Ghassan Tueni now shares this honor. Ghassan Tueni will now burry his son.


The Damn Syrians! DAMN SYRIANS!!!! They don't know how to do anything else!
Posted by Raja at 4:44 AM

I am lost for words!

Where are we going?

If it suffices to say that I also feel at a personal loss then so be it...
Mr Tueni was generous with his responses when I interviewed him in 2001 for my MA dissertation. He also made sure afterwards that I had all the necessary information and to call back if I needed anything else.

May God bless his soul! We have lost a GEM.

I'm gonna throw something out there.Let's see what people think. I was thinking about that bomb planted in Bekaa Valley that was "supposed" to kill a Sr. Hizabollah official. Now, will all these tech. advanced car bombs that have been going off not only in Lebanon, but around the region doesn't it seems coincidence that the bomb went off just as the guys were inside the house? Now, if I was hizbollah and I knew that this was going to happen today to Gebran Tueni, or even in on it. I would plant this bomb so later this week I could say "Hey, they tried to kill us to and missed. No way its Syria. It's probably the Israelis" Just something to think about. It's a strange coincidence. Another thing, I think this needs to be looked past Syria and to Iran. Everyone knows that there are Iranian agents in the South and that the president is totally nuts! Comments?

I'll second Hani. I interviewed Gibran Tueni for my Ph.D. research twice this spring, and he was extraordinarily forthcoming and gracious. He also opened Nahar's archives for me, and made sure that I had originals of any photos that I needed. For someone whose opinions I rarely shared, I couldn't help but respect his candor and his personal bravery. He paid for both today, but neither is diminished.

May his soul rest in peace..his outh will remain with us:

"We swear by the great God,
Muslims and Christians,
that we will remain united,
for the sake of our great Lebanon!"

Raja, Just a small correction: my connection is to his wife Seham; formerly Asseily: we are not related, but grew up together, and our families are still very very close. Now she is left a widow with twin daughters under the age of one! I am so angry and sad today. Another nail in the coffin of the 4th estate, freedom of expression, and lebanese political independence. That is the macro, on the micro, another bereft family, another widow, more fatherless children.

May hs soul rest in peace alongside all Lebanese Martyres.

There might be a sit in tonight in front of either the embassy of Lebanon or Syria...

PS, pointing to syria-lebanon intelligence, gebran just returned to lebanon yesterday from being abroad for a while. So someone had to know he was back and place the explosives etc.. in under 24 hours. This was preplanned obviously. They were ready to go just wating for "actionable intelligence". It makes me sick

please keep us all informed. I will post an entry in the blog.

When did Ghassan Tueni's son and daughter die, and what was the cause of their death?
May God comfort him and his family, now that he has lost his wife and all three children.
It is terible when we burry our parents but much worse when we burry our children