Syriana - one of Hollywood's best works on the region 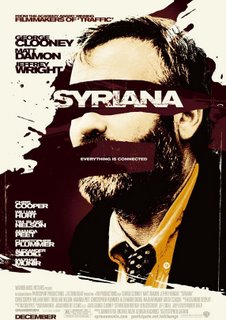 How could a movie be simultaneously one of the best I've ever watched, yet one of the most devastating? For years I've watched depict the Arab world in an overly simplistic, and sometimes, insulting fashion. There were always the Sheikhs, the religious fanatics, the chauvinist men, the wild mob screaming Allahu Akbar, etc.... was always referred to when a particular character described a setting of pure destruction and chaos. And the list goes on.

Yesterday though, I left the movie theatre with two overwhelming emotions. The first was triumphant. For the first time in my life, I had just watched a movie (that millions of Americans will eventually watch) that actually depicted Middle Eastern politics as it really is - or rather as close as any production could get. The other emotion I felt was intense depression. In depicting reality, the movie could not but pull some very powerful emotional chords inside of me. At one particular scene, I literally wanted to jump out of my seat and just scream out of frustration!

In the final analysis, I recommend this movie to everyone interested in the region. Whether you agree with it or not, it is definitely worth the watch!

SPOILER ALERT-- DO NOT READ IF YOU HAVEN'T SEEN THE MOVIE

I agree it's a well made movie. I saw it last night. It was also depressing as hell. Of course what bugs me about films like that is how they fool you into thinking they depict reality. Many people will walk out forgetting they just saw a piece of fiction. I am talking about the claim in the film that the CIA takes orders from oil companies. The oil lobby in the US is very powerful, yes, and it can probably get the audience of anybody it wants. But can they assassinate an Arab prince with a laser beam from space to please the oil guys? Isn't something like that difficult to hide? It's ok though, it's a movie and that's what good movies do, they take you to the extreme and back. It did communicate something scary and for that it was very effective. I just hope people don't use it to fan the flames of their conspiracy theories.

Another thing that depressed me about the film was the way Hizbullah was depicted. I read that the director traveled to Beirut and met with them, so I wasn't surprised that their portrayal of Hizbullah was rather positive. Hizbullah in the film is very powerful, it keeps and honors its word, and oh yeah, it is pretty much in control of the country. When George Clooney's character was sent to Lebanon to setup the Prince's assassination, he headed straight to Hizbullah land to get their stamp of approval on his stay. We see him in a Lebanese taxi driving into what looked like Ouzai, with Hizbullah fighters positioned on rooftops, and then he arrives at the sheikh's residence, where a bunch of Moroccans posing as Lebanese Shia (it was filmed in Morocco) put a bag on his head and take him to meet the cleric. The Hizbullah cleric gives him his word and protection. And later in the film when Clooney is betrayed, the Hizbullah cleric keeps his word and saves his life (of course Clooney's own people, the CIA, aren't so honorable and engage in serious backstabbing).

In this film, Lebanon's ruled by Hizbullah. That's real. The CIA blows people up in the desert on orders from powerful oil companies. And then you have the Pakistani Islamist who lost his job and ended up blowing up an oil tanker. The last scene in the film implies that the suicide bomber and the CIA agent, Clooney's character, aren't that different from each other. There is some truth in the film, but much of it is based on tired old conspiracy theories. But it's a good film nevertheless.

Raja-- did you notice the large crater that explosion left? What did it remind you of? I am not suggesting anything, but it looked awfully similar, didn't it?

WARNING: MOVIE SPOILER - DON'T READ THIS IF YOU HAVE NOT WATCHED MOVIE AND DO NOT WANT TO KNOW WHAT HAPPENS BEFORE YOU DO!

you are probably right in the sense that some aspects of the movie were exaggerated, but I would not go so far as to say that they were completely false. I mean what better lense to view middle eastern politics and middle east-US relations than through the prism of oil?

to say that all of our region's problems come about because the US has killed all of our great leaders is stupid. We have some serious structural problems that we need to fix ourselves. However, the movie does drill a very strong and depressing message: oil is a curse, much more than it is a blessing.

I wish none of it existed in our part of the world.

I saw it today, I found it disappointing and full of clichés

I haven't seen it yet, but from what I've been hearing (in the US) it's full of cliches about the CIA and the evilness of our evil government and it's evil, evil ways.

Not that there's anything wrong with cliches... sometimes they are correct. It just makes everything evry predictable :)

I haven't read any of the above except for the original thread!!! :-)

Looking forward to seeing it here in the United Kingdom of Great Britain and late movie releases in 2006!

Amazing movie, hands down my favorite of all time. One dissapointment though was how modern Lebanon was portrayed as being the same as 1975-1990 Lebanon: ruled by militias. I mean sure the southern suburbs of Beirut look like that and are under Hezballah control, but not the whole country! Plus, like it was mentioned above, they made Hezballah look like they virtually own Lebanon and do whatever they want in it. Also, if the CIA wanted to assassinate/kidnap someone in Lebanon, would they really turn to Hezballah? I mean aren't they supposedly "arch enemies"? Didn't Hasan Nasrallah basically say that "America is the great devil"? Come on, really now, if anything I'd imagine the CIA recruiting the help of some Sunnis or Maronites, not Shiias and especially not Hezballah Shiias. And finally, the thing that I found to be the most amusing in the movie is how dark skinned the Lebanese were portrayed as being. They made us look like Gulfies and Persians. Most, if not all, Lebanese people I know (including myself) are freaking snow white! haha, not to mention the Moroccan Arabic they gave, which I bet no Lebanese person even understood a single word that was said by the people playing the role of Lebanese people. Oh, and one last thing, did anyone notice how much money Clooney put down for his coffee and sandwich at the hotel? He put down 2000-3000 LBP. hahaha, I laughed my ass off when I saw that, because anyone that has been to Lebanon knows that that much money wouldn't even buy you a stick of gum at a 5 star hotel, like the one Clooney and the Prince were staying at. Anyway, apart from the little stereotypes that we are now used to (i.e. the age old reference of Beirut being the most chaotic city in the world, while in reality it has the lowest crime rate; and the portrayal of the Lebanese as Arabs, while infact they aren't and share nothing with the Arabs), and the few exagerations, Syriana is definitely recommended to anyone who is interested in politics, especially those involving the Mid-East and oil.
Excellent movie, two thumbs up!

Usually I never comment on blogs but your article is so convincing that I never stop myself
to say something about it. i am Really very happy to say that this post is very interesting
to read.

You’re doing a great job Man, Keep it up.
I blog at
sean brown

Usually I never comment on blogs but your article is so convincing that I never stop myself to say something about it. i am Really very happy to say that this post is very interesting to read.You’re doing a great job Man, Keep it up. I blog at