More posters and grafitti from the streets of Beirut

I took the following photographs as I walked through Ras Beirut, Hamra and Koreitem. It is a small selection of pictures, but nevertheless quite revealing. My path began at the Popeye's restaurant which is located on the Corniche (facing the old TGI Friday's); it then took me to Sadat Street in Hamra, then Koreitem and finally, Sakiet el Janzeer.

These neighborhoods form only a small section of Beirut. A section that is nevertheless quite diverse, both socio-economically and in a sectarian sense. As I walked through Koreitem, for example (next to the Saudi Embassy), I walked passed a small group of teenagers. I was pleasantly surprized to hear one of them refer to the other as "Danny." I hope you enjoy the pictures and the accompanying commentary. 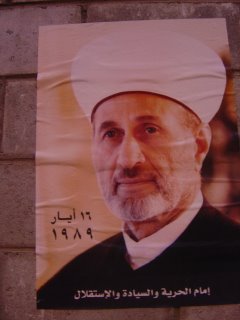 The slogan on this one reads: "The Imam of freedom, sovereignty and Independence." He is the late Mufti Hassan Khaled. He was assassinated in 1989 by the Syrians. It is quite obvious who put up this poster. 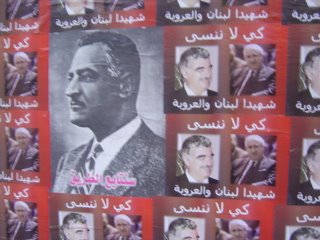 The current Syrian struggle is to try to appeal to the Sunnis by playing the "Arab card." This collection of posters harkens back to the grandaddy of Arab Nationalism, and then plays on Sunni sentiment by highlighting the two Sunni Martyr-Leaders. 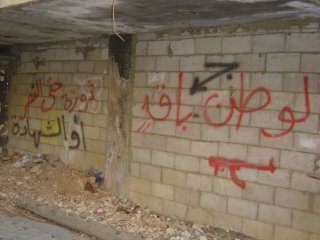 I found this grafitti on the walls of a fomer Syrian army base. The base was situated around halfway between the Croniche (where I started my mini-treck) and Hamra. I believe the authors of this piece of work are the Popular Front for the Liberation of Palestine (PFLP) - Habash's group - not Jibril's.

On the right it reads, literally, "The Country Remains" (referring to Palestine)
On the left it reads, again literally, "Revolution until Victory, or Martyrdom" 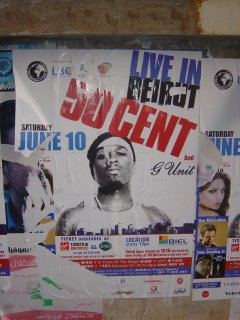 Yup, you'd better believe it! He's in town, and I'm missing his concert. I hope he doesn't shoot anybody! ;-) 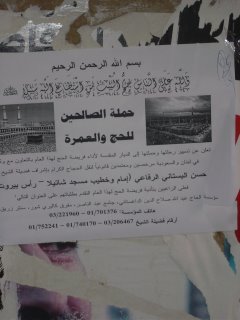 And this little pamphlet was actually on another 50 Cent poster that was right next to the one above. Ufortunately, it's not so obvious, so you're gonna have to take my word for it. Lebanon: A country of amazing contrasts!

Lest we forget, and for the record:

Cheikh Hassan Khaled (more than Hariri and way earlier) defended Syria's position in Lebanon in the early days of mayhem and Syrian interference.

Same can be said of his number 2 guy at Dar el Fatwa then, Cheikh Sobhi Saleh. Both men were killed most likely by Syrian agents when they tried to rectify their positions.


Rashid Karami is the only Lebanese figure killed in the "war" where Syria is not high on the list of suspects.

That is because he was the dog of Syria and the PLO to the very end. I will not tire of repeating it: Rashid Karami is the single-most responsible politician for the catastrophes which befell Lebanon.

Yeah, and he was a corrupt thief in peace time too. I hope he is rotting in hell where he belongs.

I don't think you can blame one person (or mostly) for what befell Lebanon. It's just simply not right.

Interesting. Raja is right about the habash's PFLP, as the party's sign can be found right over the 'Watan' word. The sign reads 'jabha' with the arrow pointing to Palestine, symbolizing the return of the refugees.

The Nasser-Karami-Hariri poster is weird: One was a socialist-nationalist , one was a non-socialist-nationalist, and the last is a capitalist-non-nationalist. It just goes to show you that in Lebanon, ideology and political ideals matter not: It's instinct and tribalism, even more so today.

I don't think you can blame one person (or mostly) for what befell Lebanon. It's just simply not right."

--Wasn't the piece of shit Karameh the one who paralyzed Lebanon's national army and forbade it from reigning in the Palestinian thugs???

--Wasn't that closeted fag the fucking architect of the Cairo agreement, which basically made Lebanon lay supine while the Palestinians (and every other lame arab "cause") humiliated and gang-raped it???

Homophobia, Sexism and Racism in the same comment, and all it took you were a few lines!!

ps: The lebanese civil war is a little more complicated a story than that of "Le petit chaperon rouge". Why don't you pick up a book (or two) instead of rehashing tired old fairy-tales?

Of course many are reponsible. But this guys takes the cake. I am restraining myself because my feelings are as intense as z3oure if not more.

To make it short:

The catastrophic 69 Cairo accord was brought about by 3 key gvmnt figures: Helou, Bustany, and Karami. Helou and Emile Bustany are in the garbage heap of history, and that was the END of their political careers.

Karami went on to be PM again, and presided over the dismantling of the state, army, and the descent to hell in 75-76.

Bonus: he never did much for his home town, and stood against his gvmnt in 1958, and was corrupt.

Which volume of the wahabi/diquecheney/fauxscheick conspiracy should read to reach your level of irrelevance and idiocy?

My intellect so profuse
your answer so obtuse
I write and I amuse:
"no need for a muse
to make you blow a fuse!"