Hypocricy & Multiple Personality Disorder - you decide which one is worse! 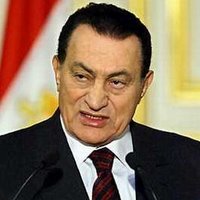 Yesterday, Hosni Mubarak declared on TV that "those Shi'as" living in Arab countries are effectively the source of all the Middle East's problems because of "their loyalty to Iran" as opposed to the ruthless regimes (I mean countries) they live in. Please read Abu Kais's powerful response to this hypocrisy at From Beirut to the Beltway.

But allow me to entertain you with one thought regarding Hosni's "profound" analysis:

Here is a dictator who's "sunni" subjects would vote to eliminate their "Arab state" and replace it with a Califate lead by Ayman al Zawahiri thanks to his pathetically corrupt and incompetent rule which has spanned what feels like a millennia!

But before you go, I would also like to direct your attention to the response of our favorite political party in Lebanon; you guessed it... Hizballah:

The fundamentalist Shiite movement, which has its own militia, described Mubarak's statements as lies meant to stir tensions between the Arab world's Sunni and Shiite sects.

"These are dangerous and false words that reveal fanaticism and sectarianism aimed at sowing discord wished for by America," said prominent Hezbollah member Sheikh Mohammed Yazbek.

"The Shiites respect Iran and Syria and but work for the good of Lebanon... We have never been anyone's agent and we will not ignore our nation's interests on account of
anybody else," Yazbek said. AFP

These comments come from the very same party who's leader said the following only a few days ago: 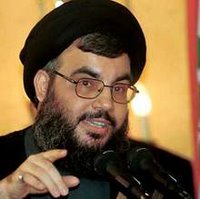 I think that our favorite political party needs to make up its mind or see a psychiatrist in the interest of curing a pretty severe case of multiple personality disorder.

*Translation Source: Abu Qais @ From Beirut to the Beltway
Posted by Raja at 5:58 PM

Of course, Hizbullah ARE agents of Iran who put the interests of other countries ahead of their own's. Don't you find it wonderful how they managed to insert Syria into their their "response?" I know plenty of Shias who have no respect for either Iran or Syria. Number 12 better return soon to end this charade.

i think the comments were aimed at fools who exaggerate lebanon's so called greatness. lubnaan al 3atheem. take LBC's pathetic program of Great Lebanese where they highlight great personalities and tie their lebanese identity to their grandmothers cat. Like the program on Elia Khazan an American who has no real ties to Lebanon.

Interest of a country?? What is that? Interest of real human beings that may not match glorifying chants of elitist factions are not ok??