UPDATE: The national dialogue meeting was adjourned and guess what? They have postponed coming up with any definitive answers on the Presidency and Hizbullah's arms until mid-May.

The national dialogue is the best and worst phenomenon hitting our country after the Beirut Spring of last year. The best, because politicians are still talking and haven't pointed guns at each other yet. The worst, because it has killed any momentum towards resolving long-standing issues in the country, because it has killed many of the youth's willingness to participate (heck, we have no say and no role!) Time has no essence in our part of the world, but in reality, life goes on, students graduate from schools, youth get unemployed and search for jobs, others leave the country, others shut down their businesses...you name it.

They're in there, still talking...

And according to the Tayyar website, Pierre Gemayel left the national dialogue meeting and told the press that the Presidency issue is still on the table being discussed. This is perhaps good news? Good news that the participants are still talking and have not given up yet?

This time around, though, the pictures don't show any coziness or smiles amongst the attending politicians. Since the dialogue started some two months ago, there were more high hopes about the outcomes. They kept on postponing the pertinent issues, until many grew apathetic (including me), until the rift grew larger amongst the two competing political blocs.

Anyways, we're still waiting for the outcomes ensuing from today's talks. What could come out of today?....Until then, check out this picture that speaks a thousand words: 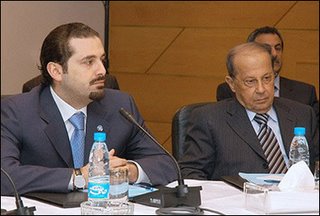 "Nobody knows how many rebellions, besides political rebellions, ferment in the masses of life which people earth."
Posted by Doha at 12:40 PM

national dialogue shmialogue!!! nothing is going to get done in those stupid meetings. Long live Lebanon!